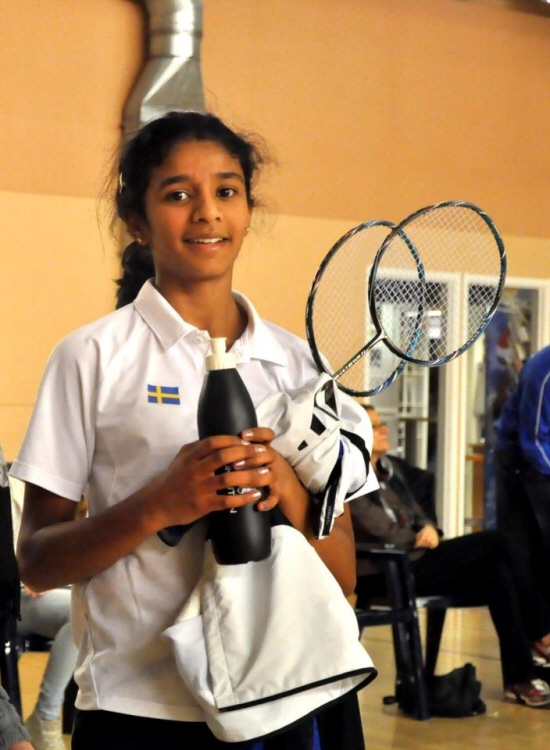 Ashwathi is certainly a prominent and one highly talented young player in Sweden today; with great racket skills andfitness.  She trains approx. 15 hours of badminton every week including 4 individual coaching sessions.  Recognising her talent, her school (IES,Täby) has re-organized her school time table to help her receive adequate training and time to compete in Sweden and abroad.

Her school ensures regular interactions with the club and the coaches to ensure and track Ashwathi’s progress. She was also spotted and selected by Københavns Badminton Klub to represent the club in the domestic tournaments in Denmark.

Ashwathi also trains in the prestigious “Prakash Padukone Academy” in India every summer for 1 month.  The students in this academy are coached by Prakash Padukone (Former world no.1 and All England champion) , Vimal Kumar (former international player) and Yousuf Johari (Indonesian coach)

Tell us about your days in India. Schooling

I was born in India and did my schooling until 4th Grade in Bangalore (National Public School).

How were you introduced to Badminton?

I used to accompany my father to the HSR Badminton club in Bangalore during weekends. He used to play for 1-2 hrs and then I would get an opportunity to play for 30 mins. That is where it started and I started liking the sport. Later I joined a coaching session for children where I had few of my friends also joining.

Was it your parents or you who felt that you have good future in badminton?

It was my parents who encouraged me into badminton.  My mother used to take me 3 times a week in an auto rickshaw to the club which was around 5 kms away from home .  I am not sure of how good my future will be , but I am definite that I enjoy playing badminton and I have a lot of friends because of it.

Tell us about some of the famous tournaments you played? 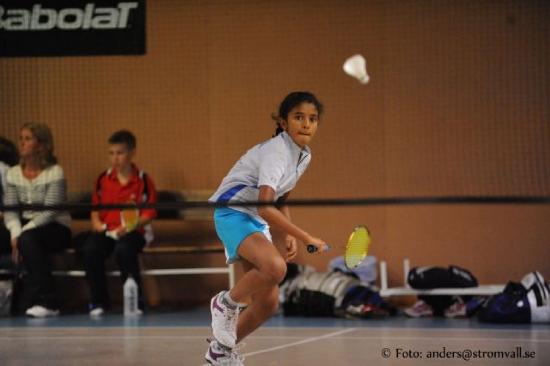 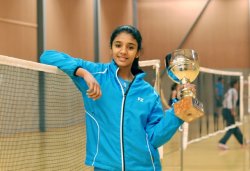 Ashwathi Vinod Pillai of class 8d, for being named Player of the Year in Badminton 2012 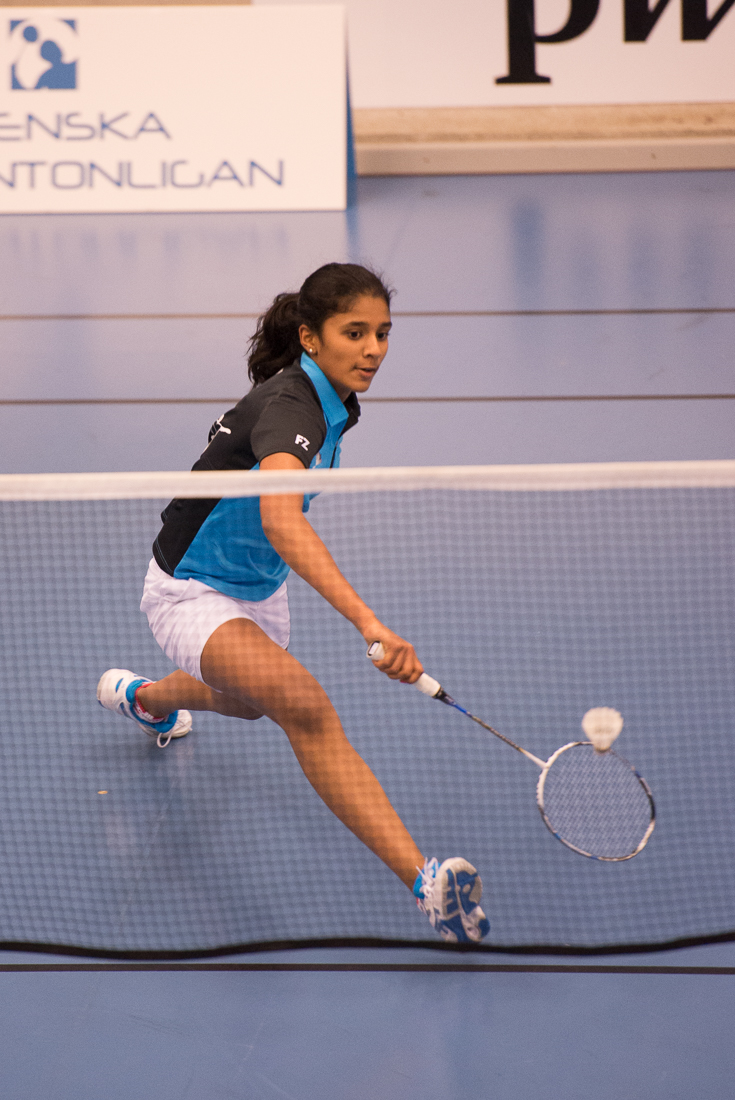 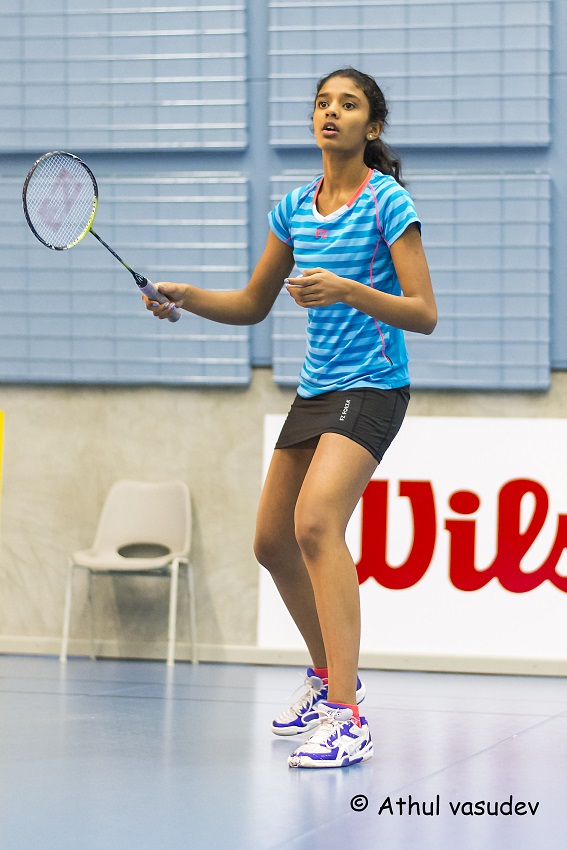 Was there any unforgettable experience in any of those?

In many of these , I am one of the youngest players in the tournament. It’s a great feeling when I wear the Swedish National team jersey and play for Sweden. It’s very energizing when I have my friends cheering with the national flag from the sidelines.

Winning my 1st national championship was the one of the best experience. It was in Kista racket center . The announcer was very energetic when he announced my name to receive the prize and he was looking at my dad. My dad had tears in his eyes. I also had a family friend of us (Dhar family) who came to support me. It was a wonderful experience.

Did you get a chance to play with any other Indian Players?

Yes, I practice every year for 3 weeks in Prakash Padukone Academy in Bangalore. And I get to play with some of the best players in India. Also I practiced a lot with Sayali Ghokale during her contract with Täby Badminton. 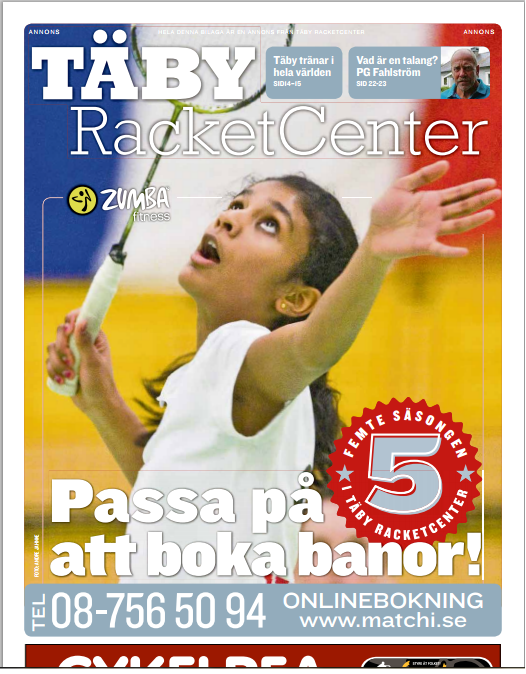 From your busy schedule of tournaments and schools , what else do you do when you get free time?

I like to bake cakes. I do it when ever I get some time. My brother also encourages me to bake since he likes it. I also watch some programs on Internet

How do your teachers and students co-operate with you at school , when you are busy with tournaments?

I think I have the best possible school (IES,Täby) ever. The teachers are more than happy to help me in my studies, since I miss a lot of school sessions due to my practice and tournaments.

My school has helped me in reorganizing my time table to suit my practice. I get around 6 hrs of time from school for extra practice. The school has organized an extra tutorial for me to catch up with the lessons.

My classmates are very sweet, they understand my situation and are always willing to support especially in the group assessments. 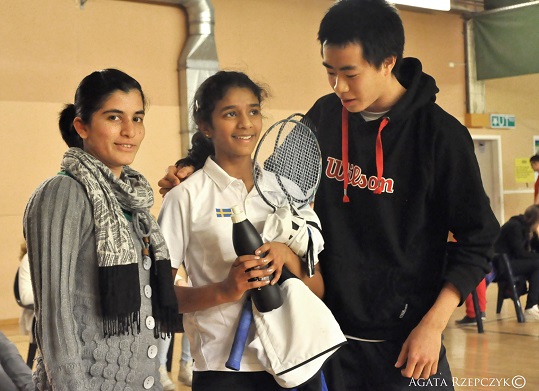 Who are the people you admire in the badminton world and outside?

I am definitely inspired by Carolina Marin (the new world champion). She is my idol. She has proven that it is possible for a non-chinese and especially an European to be a world champion.

Outside badminton, I admire Deepika padukone a lot. I meet her father (Prakash Padukone) during my 3 weeks practice in Bangalore.

Is Sweden a better place for kids to develop their talents?

I can’t compare because I have not played /practiced  a lot outside Sweden. But I think the club culture in Sweden helps a lot to develop talent.

Swedish Olympic committee’s  camp which had 110 participants from various sports.